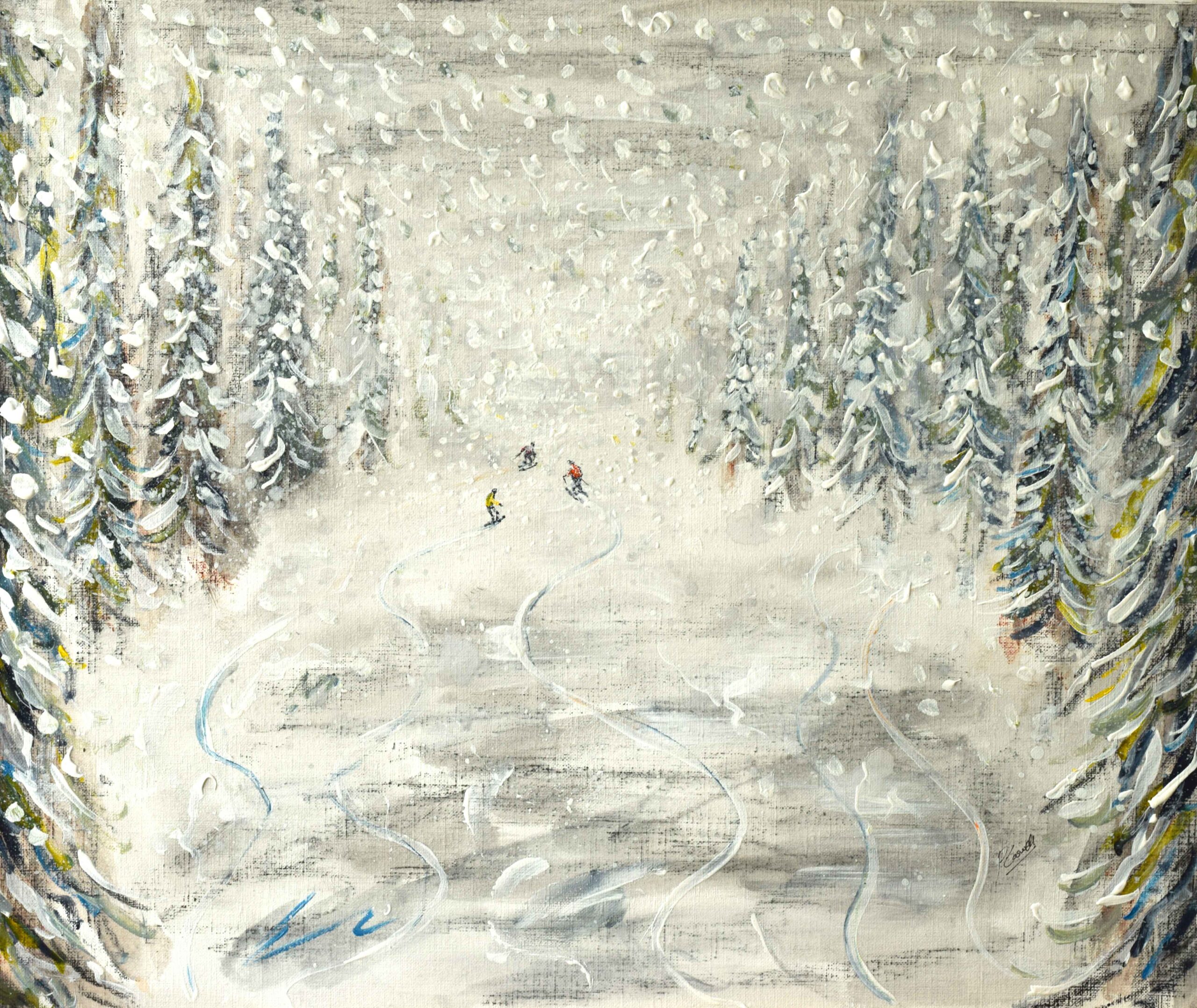 I’ve been missing the snow so much that I had to create a set of painting to get deep into the skiing feeling, the cold, the ice, the snow.

Not forgetting snowboarding but it doesn’t rhyme as well but they are there as well, blasting through the powder but then stuck on a flat spot of deep powder, whoops didn’t see that coming. Can’t see a bloody thing. Am I going up hill or down? On your butt, upside down in a hole of powder is the best guess.

The colourful paintings really capture the life, the vibrancy, the fun and laughter of skiing, the excitement, the exhilaration.

But what I was missing was not this. Over a year with no skiing. It wasn’t the fun, the speed, the laughter, the excitement I was craving. It was the early January ski weather, cold, bleak, so cold it can suck the colour out of even the most fluorescent ski jacket. Stone dead black and white, grey, freezing blues. Ice hangs in the air, full of crisp and frost. Breath plumes and mists across your face, fingers tingle, toes numb. Nothing to hear but the wisps of blowing snow, the wind in the trees the lulling clanking of the lifts in the distance and the pure silence of falling snowflakes.

Exiting the lift, the wind picks up, the snow blows hard, the ice pricks your cheeks, and all ahead is nothing to see but snow, heavy snow, blowing football size flakes dancing and melting on on the top of your nose, one way then another, swirling dancing and then melting on the end of your nose.

White fills the air and the ground, snow and mist and more some. Tracks covered, drifts crossing, only poles to follow one at a time. Going uphill or downhill it all feels the same with soft snow under feet. No idea where you are, moving or stationary, then bump and crash…..yep definitely was moving but not now. Now which way up am I? Ice and snow wedged up your top and down you trousers, inside gloves and down your boots.

Its an assault on the senses of the coldest and snowiest kind, cold creeping in from toes and fingers to chill to the core. So cold it blows right through you. Even the trees are shivering. Not sure why it feels so good, why I miss it so much but maybe it is the hot chocolate, coffee and or rum at the end of this piste , the anticipation, the imagination, which is creating the wonderful warm glow inside to keep me going.

Skis off, shake the snow off like a fluffy dog. Feet deep in powder and find the door to open, brushing the fresh snow with it and then into the warm glowing chalet, fire aglow and drinks awaiting at the bar. Thanks. Clothes off to warm and dry toasting by the log fire. Mine is a coffee, a large caupacino.

And all this talk over coffee is the anticipation of how much, how deep and will we be able to see a bit more in the afternoon as the clouds lift to peak the light of the sun and pale blue skis to allow a blast of turns through cold dry and fluffy pristine powder. More snow tomorrow they say.

Does it get any better?

Its all about a feeling not seeing, the inner feeling as snow obliterates the sights these paintings are trying to capture the bit you can’t see. Its all inside out feelings trump the seeing as you sense each turn as vision fails and turns guided by the feeling of the snow underfoot brings a special sensation, a very beautiful sensation. But that is as long as you don’t get a rude awakening and crash headfirst into a pile of cold, freezing cold powder.

This set of 10 very snowy ski prints and posters was my way to try and capture this immense and thrilling feeling of the cold, the snow, the bleakness to try and recreate that wonderful inner glow of the sheer beauty of a landscape devoid of colour dissolved by the coldness and made at peace by the endless snow fall descending silence to the slopes reflecting the beauty onto the inside where all resides and where feelings trump seeing. This set of paintings are all painted on 38cm x 46 cm heavy weight (290 gsqm) canvas linen texture paper with a white mount.

These are very simple charcoal and pen sketches to keep the simplicity of the scene where snow ice and mist prevails. Some people have called them sophisticated compared to my normal crazy colourful scenes, some called them stylish, even subtle……but I call them cold, dam cold, freezing, icy with the air full of snow and mist without a colour daring to peak out of the canvas to show itself.

You can buy the ski and snowboard prints and posters on the ski print site in this special ski print section.

You can buy the originals of this skiing feeling series on the website as mounted prints.